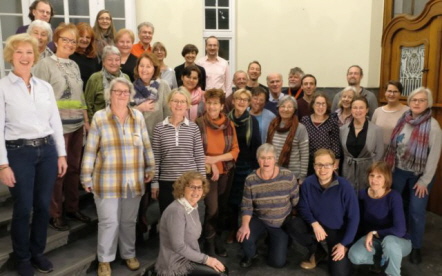 The Maria-Ward-Chor e.V. was founded in 1985 on the initiative of Michael Prager, music teacher at Maria-Ward-Gymnasium in Nymphenburg, supported by teachers, pupils and their parents. Soon singers from the surrounding districts joined the choir. At present the choir consists of about 50 members. Sacred and secular works from all musical epochs are rehearsed and performed. Since 1987 the Maria-Ward-Chor has been registered as a non-profit association.

With the exception of the school holidays, the choir rehearses every Thursday from 19:00-21:00 in the music auditorium of the Maria Ward School, in the Nymphenburg district of Munich, Maria-Ward-Strasse 5. Rehearsal weekends are held every year and individual voice training is also offered.

Despite the intensity of the rehearsals, the interpersonal aspect does not come too short  for example, in the form of communal celebrations and excursions.

Vocally confident and experienced singers are welcome in the choir and can contact the choir at interesse@maria-ward-chor.de or by phone with one of the members of the board.

Since we are a non-profit association, we need to charge an annual fee to finance our concerts and running costs. This is currently 120 EUR. School and university students are exempt.

Donations: If you would like to support our work financially, we would be pleased to receive a donation:

Thomas Baron is a lecturer for ear-training and music theory at the Bavarian State Youth Choir, and as choirmaster he supervises rehearsals. He received his diploma in choral conducting in 2014 and completed his studies as a school music teacher at the Hochschule für Musik und Theater München (Munich Academy of Music and Theatre) in 2015. In 2016 he completed his Masters degree, with distinction, in Choral Conducting under Prof. Michael Gläser.

Additionally, he assists in various renowned ensembles such as the Via Nova Choir, Orpheus Choir, Munich Bach Choir, Madrigal Choir of the Hochschule für Musik und Theater München and Heinrich Schütz Ensemble Vornbach. He completed his training with the Bavarian Radio Choir, the RIAS Chamber Choir and the Netherlands Radio Choir as well as with lessons and courses with Volker Hempfling, Martin Steidler, Gerd Guglhör, Anne Kohler, Andreas Herrmann, Bruno Weil and Alexander Liebreich, among others.

In 2011, he founded the Wittelsbacher Vocalensemble and has been leading it since then with a special focus on a cappella literature. He is artistic director of the soloist ensemble vodeon, founded in 2015. In November 2015 he was appointed new musical director of the Leonhardi-Ensemble (large choir and orchestra) in Höhenkirchen-Siegertsbrunn. Since January 2019, he has conducted the Maria Ward Choir Nymphenburg. In mid-2019, he also took over the direction of the  Nymphenburger Kantatenchor.

Thomas Baron performs as a tenor soloist and in various ensemble formations. He is also active as a vocal coach. Since October 2016, he has held a teaching position for choral conducting at the Hochschule für Musik und Theater München. Since 2016 he has been active in the Bayerischer Sängerbund as a lecturer in the field of choral voice training and further education.